At Precoa, we have a Funeral Planning Center (FPC) that acts as the bridge between lead generation and selling insurance policies. Think call center meets guidance counselor for funeral pre-planning. This project was to find inefficiencies with our current platform and find solutions that would not only increase revenue, but improve the job satisfaction of our employees who use the platform every day.

My Role: Work alongside a team of designers, developers, planners, and stakeholders for over 12 months to create a new platform to track leads and set appointments.

Making phone calls for a living

Imagine being on the phone for 8+ hours a day. Now imagine trying to set up an appointment with the person on the other line as your caller application program locks up, shuts down, or throws random errors at you. Now imagine having this happen multiple times a day, for weeks, and months — it doesn’t sound like a great experience right?

During one of our annual company-wide improvement surveys, a majority of employees said that the Planner App needed an overhaul. It was obvious to us that the current application was outdated, inefficient, and was causing major headaches for more than half our employees on a daily basis.

What problems do we need to solve?

After several rounds of initial meetings with planners and their managers who used Planner App, we discovered that the main issue wasn’t so much the experience and interface of the application, it was just that the application didn’t functionally work all the time. We calculated that if we could simply repair the application on the back-end, we could increase productivity that would mimic the production levels of 7 new planners. 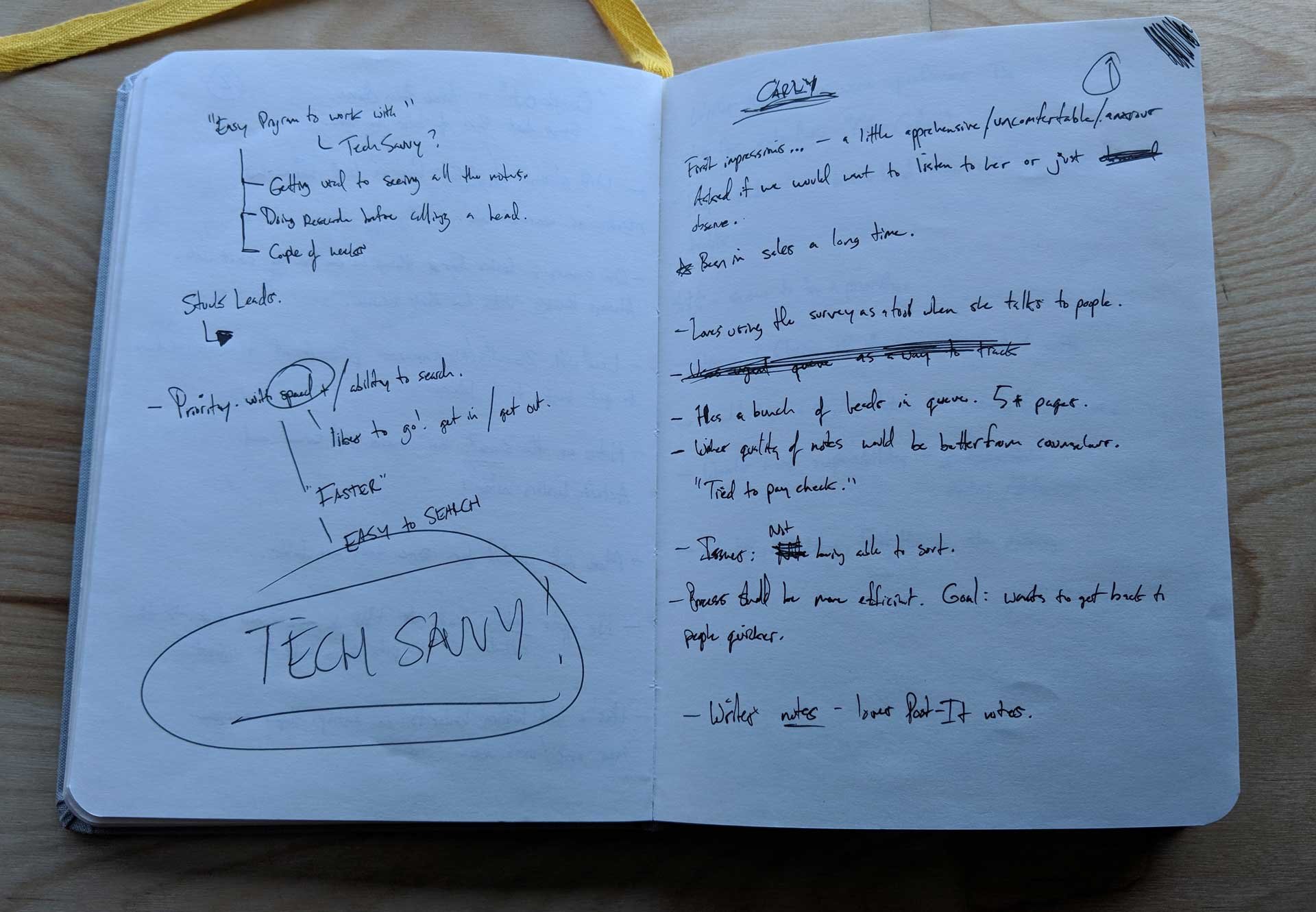 What options do we have?

1. Scrap our outdated and flawed Planner App platform and purchase a subscription into an enterprise level CRM like Salesforce.

2. Continue using our existing CRM and rebuild the Planner App ourselves.

It was later decided by the executive/stakeholder committee that it would be best to start from scratch with a new application. We had basically outgrown our previous Planner App and needed a new system to handle the new amount of incoming leads. 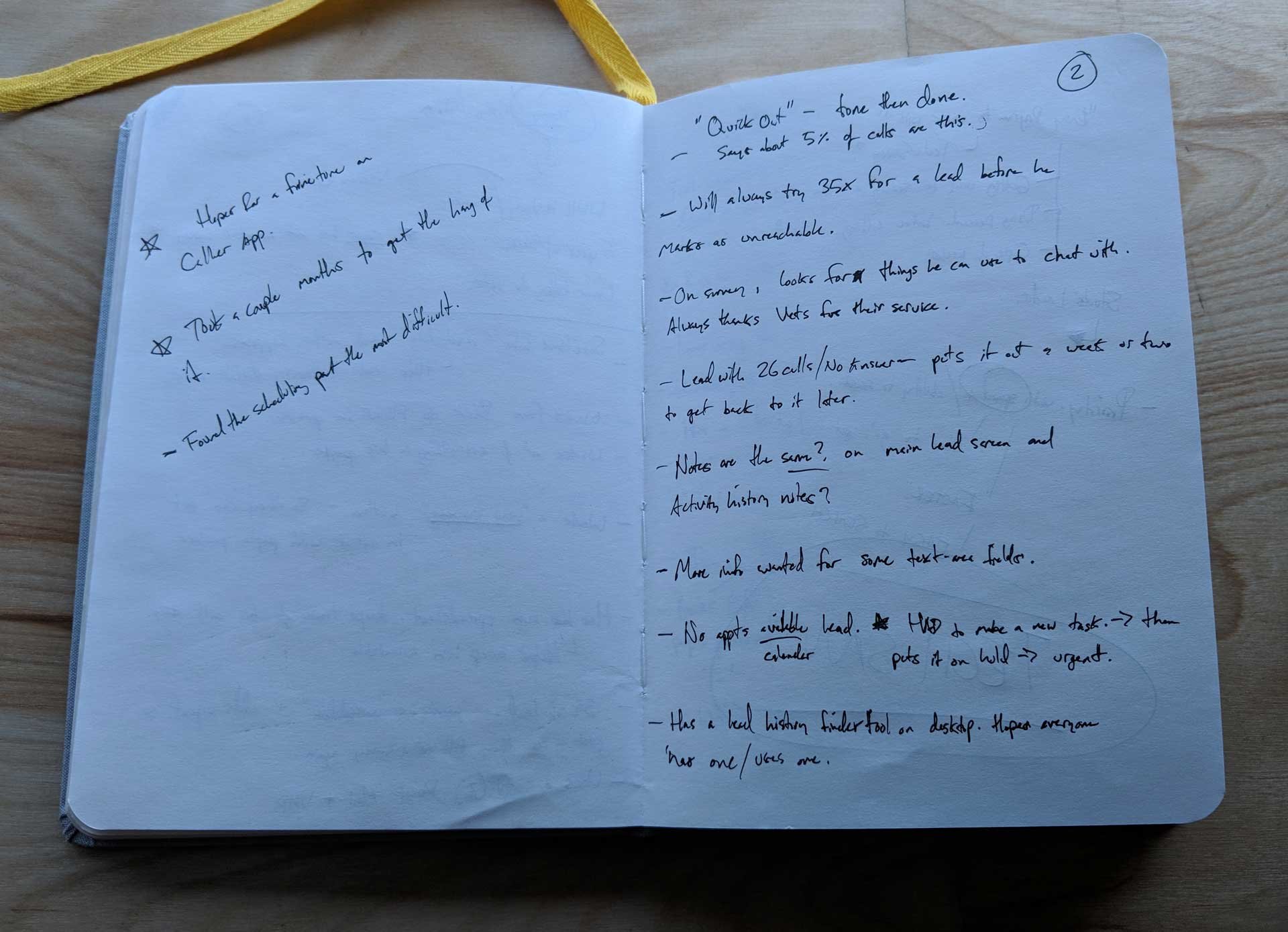 We began by trying to get inside the heads of people who used the current Planner App. We job shadowed planners, interviewed them, and even created mock personas of their roles and work types.

After every interview we would come together as a design team and report our individual findings collectively — compiling this data and storing it in our central repository for later research. 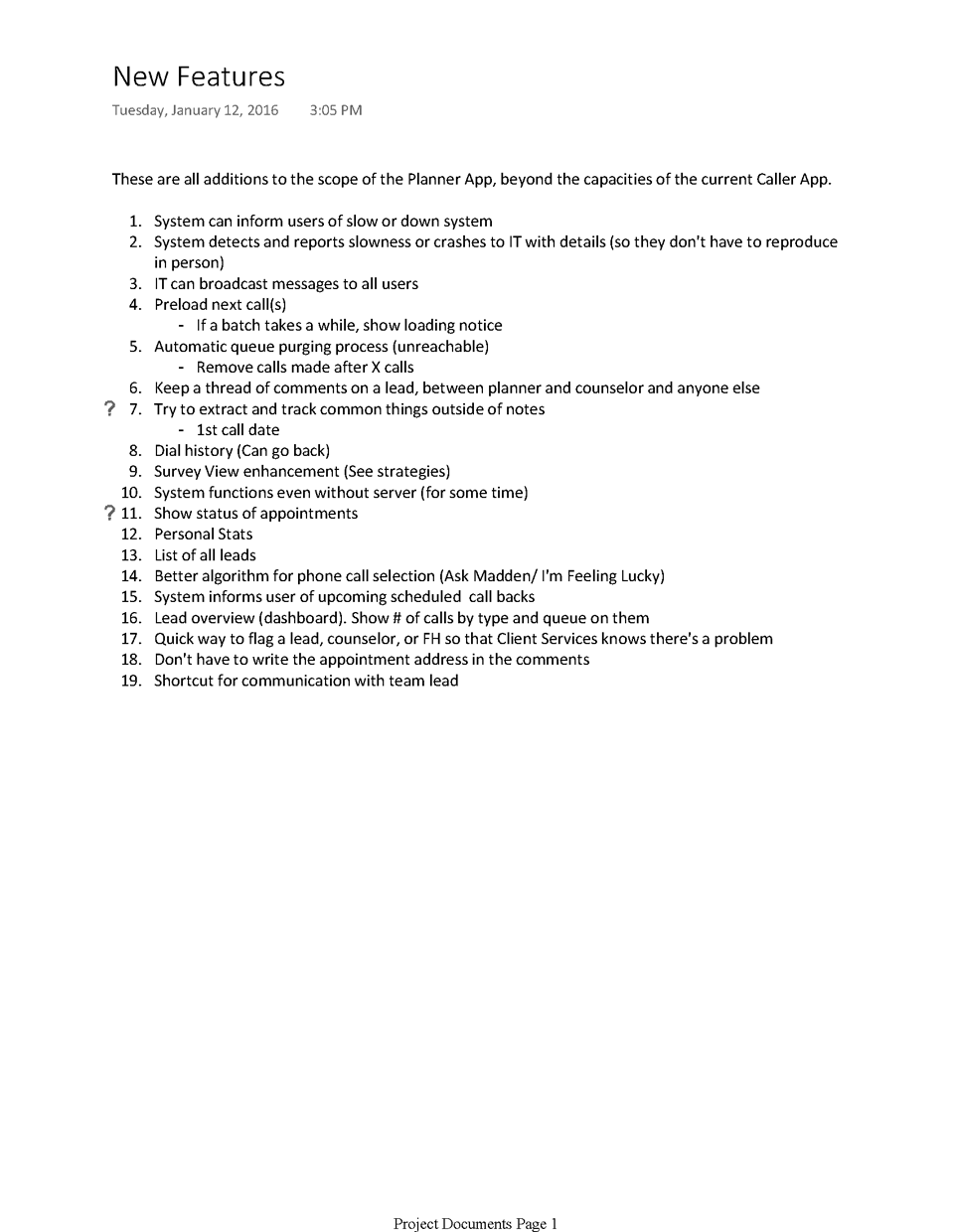 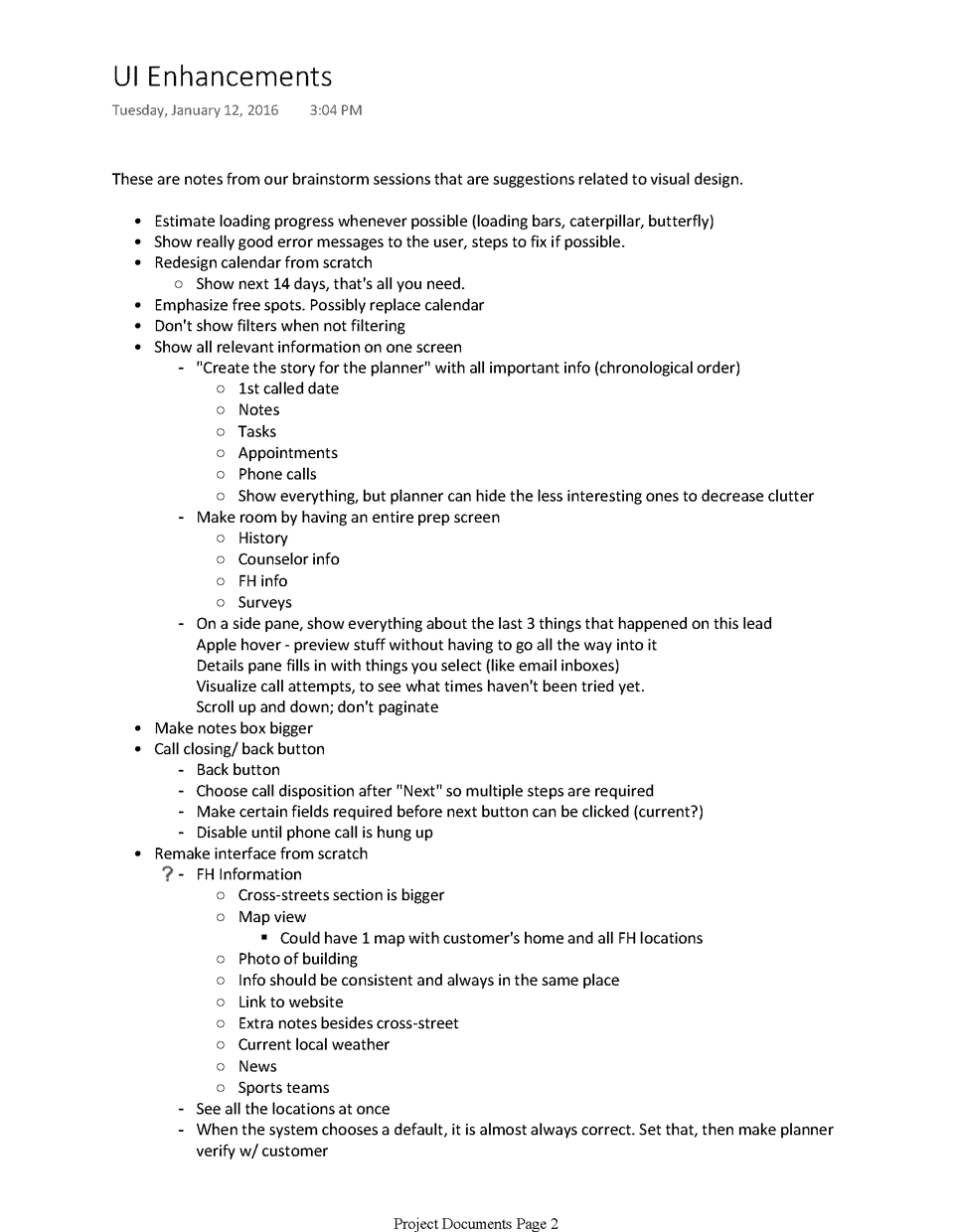 Computers are smart, make them do the work

One of our major findings during our research phase was that planners were having a hard time keeping track of their leads. Leads would either get lost in a queue or wouldn’t get a call back in the proper amount of time. This hurt our call efficiency rates, set rates, and ultimately our bottom line.

Our solution to address this problem was the creation of a custom algorithm that would automatically choose leads for a planner to call. A higher quality lead would show up next in a planner’s queue and make calling the highest quality leads almost effortless. Simply click “NEXT” and the program would give you a lead that was statistically more likely to give you an appointment — how cool is that? 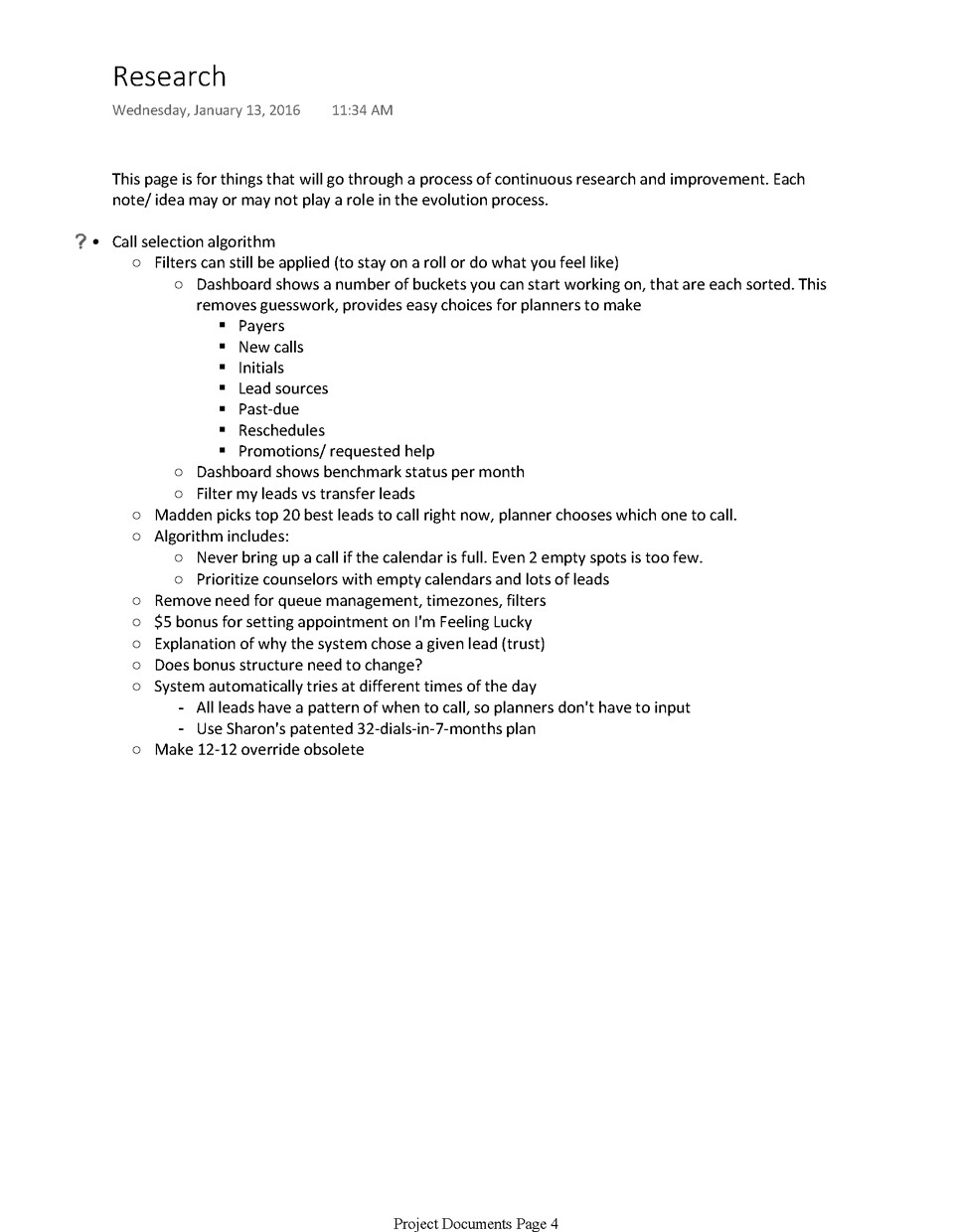 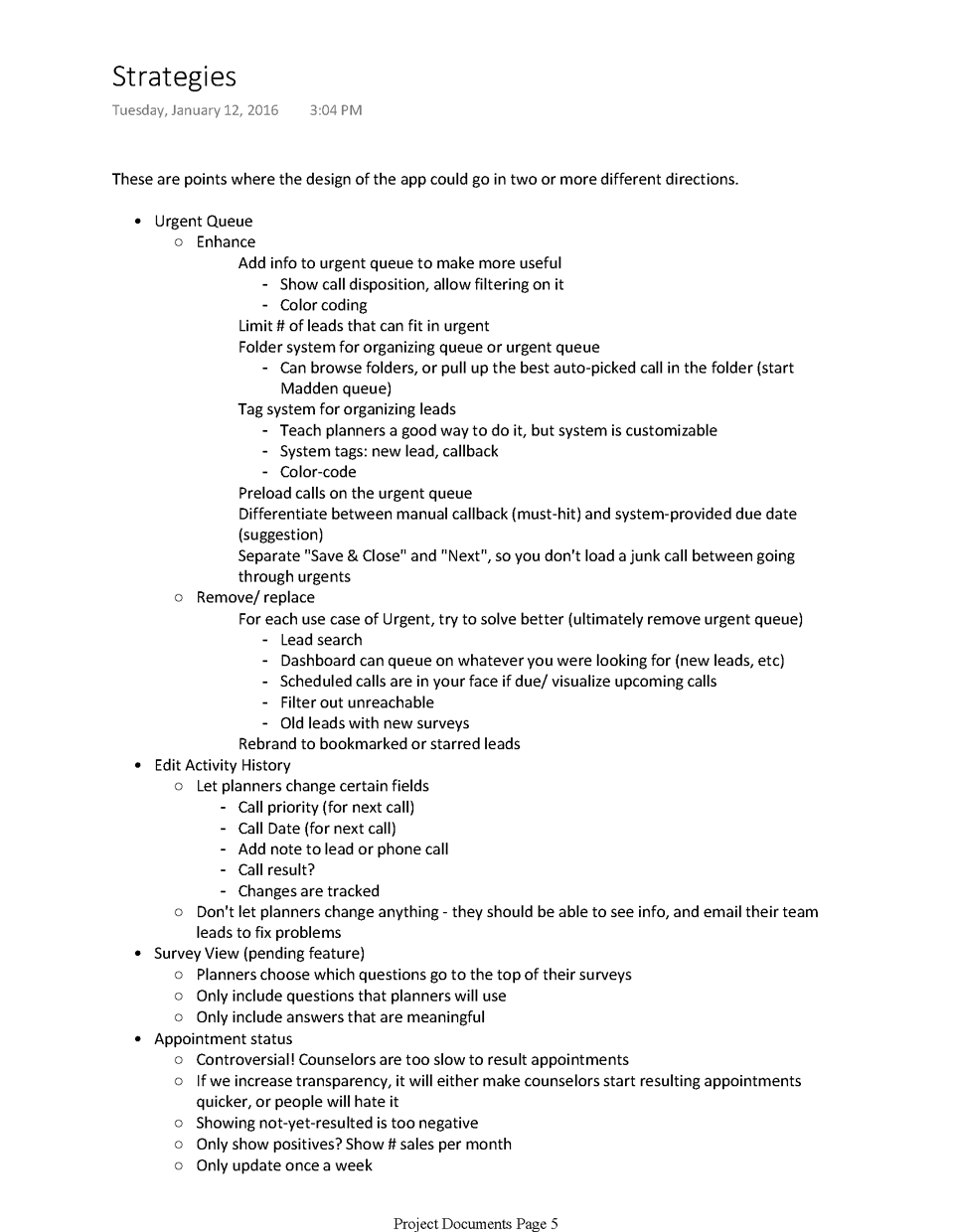 During the research phase of this project, we worked alongside the development team and the strategy team to figure out what problems we had to solve first (MVPs: Most Viable Product). We also catalogued the less critical to release big fixes for subsequent releases of the app.

Our method for discovering MVPs was used in conjunction with a strategy we took from Google’s Design Sprint. Once we had figured out which problems we needed to tackle first, we would then work in design sprints with various aspects of the application. 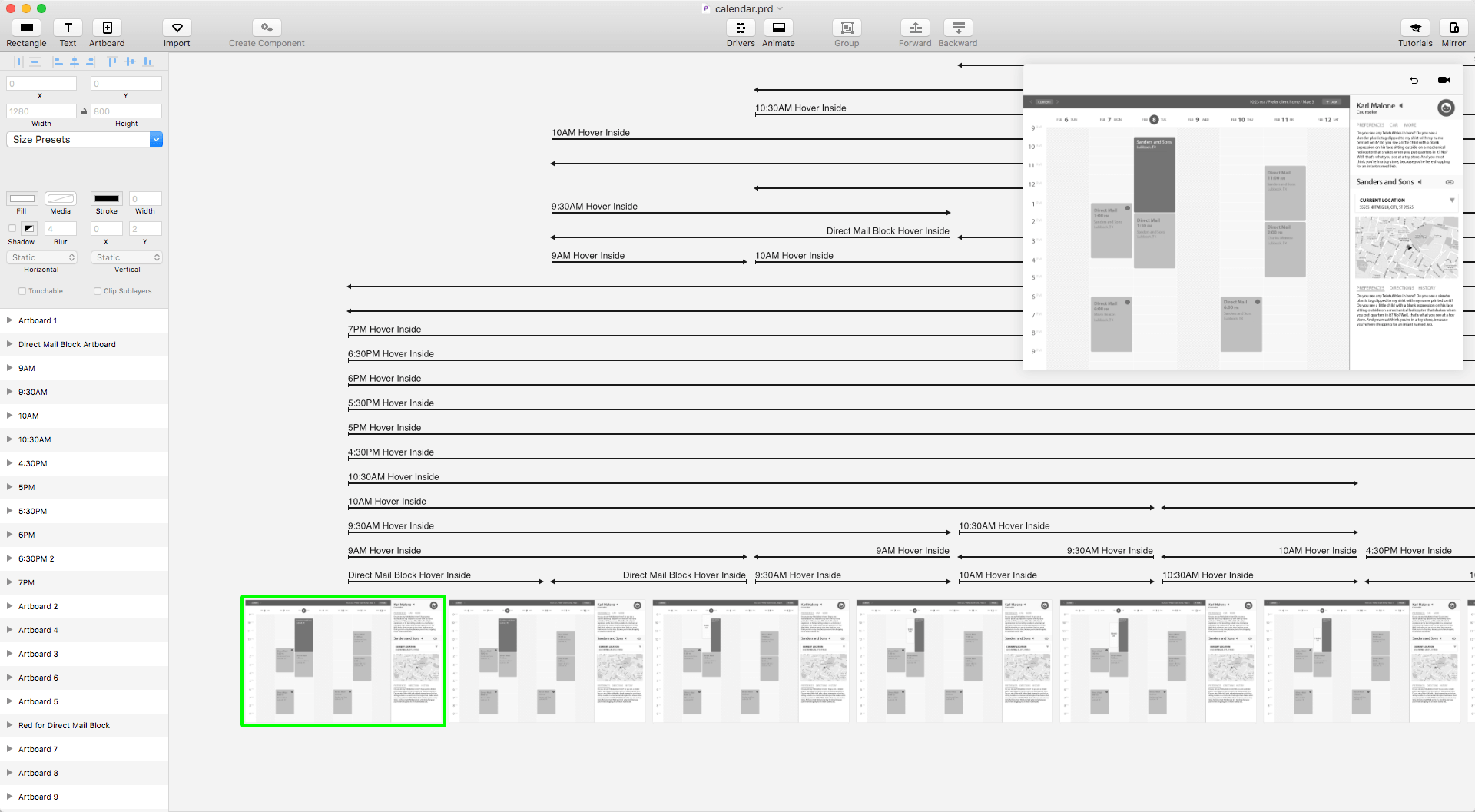 Here’s an example of a sprint used for the calendar/appointment setting section of the Planner App: 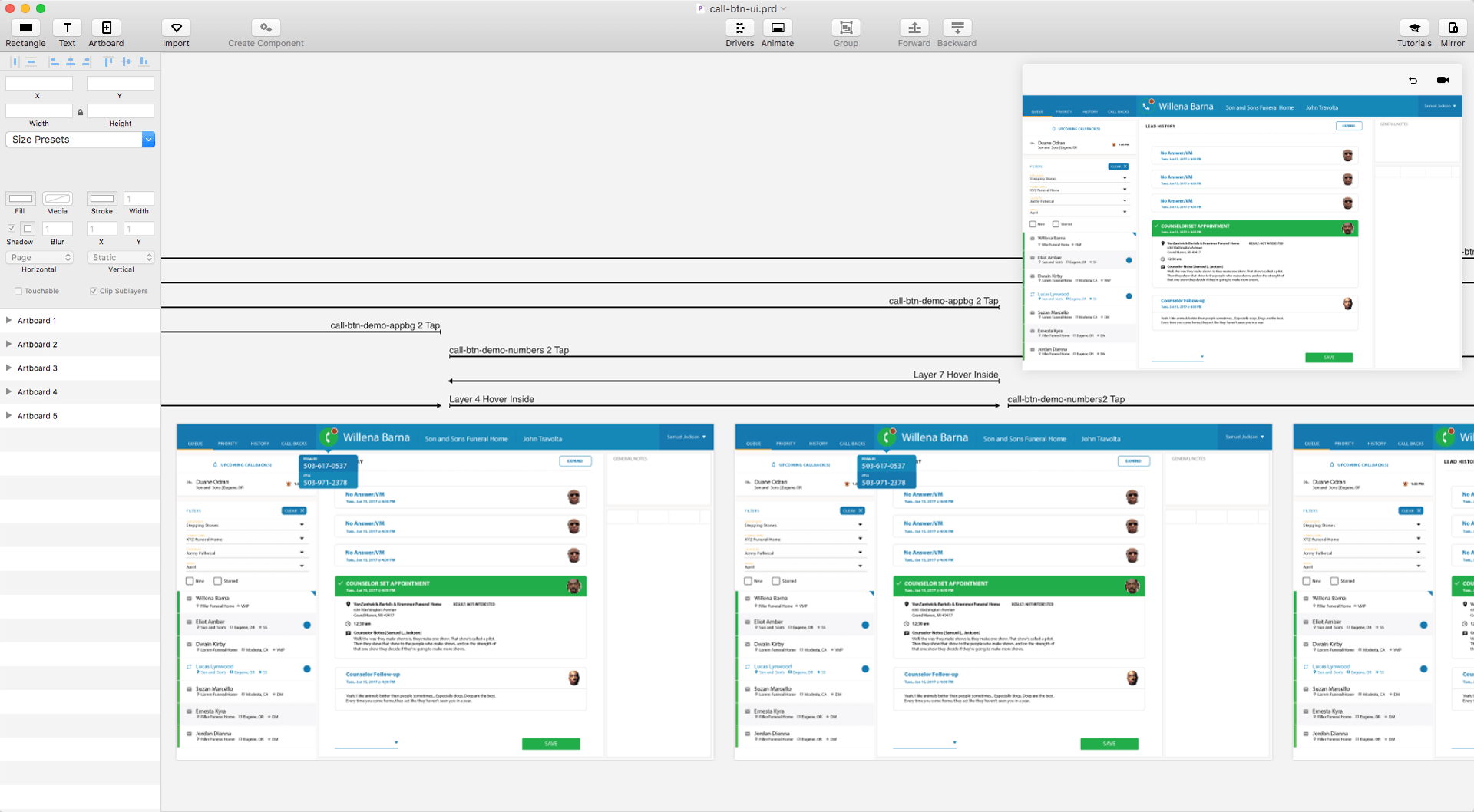 This was my favorite part of the process and probably the phase where my strongest skillsets came into play. We worked very closely with the development team, using Phabricator/GIT. We also utilized AngularJS Material which was awesome because the developers preferred using Angular in their workflow and we, the designers, loved the reference to Google’s Material Design Specification.

I worked on various tasks for both the calendar and lead window sections. I particularly enjoyed coding the smaller interactions such as picking, setting, and confirming an appointment on the calendar window. 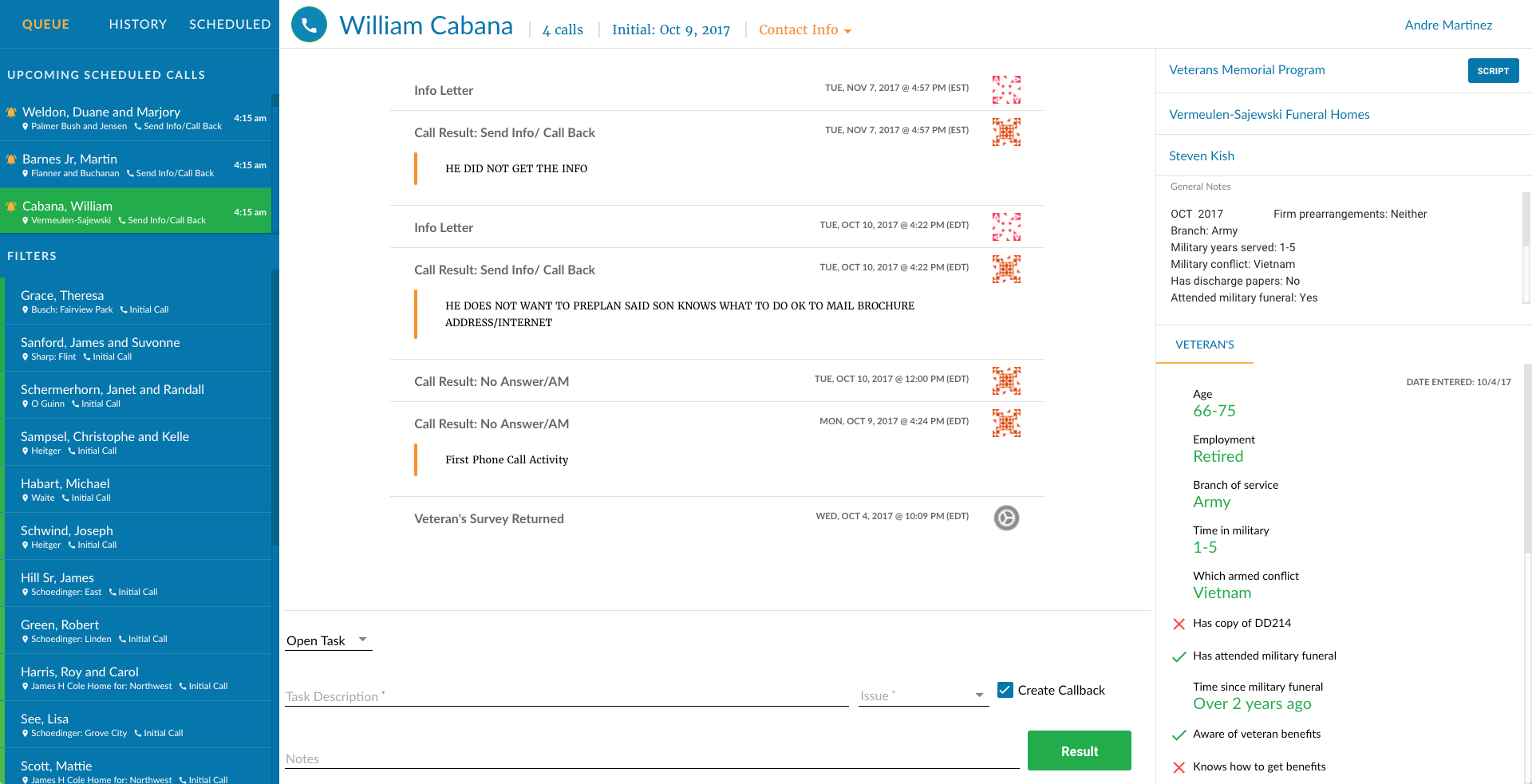 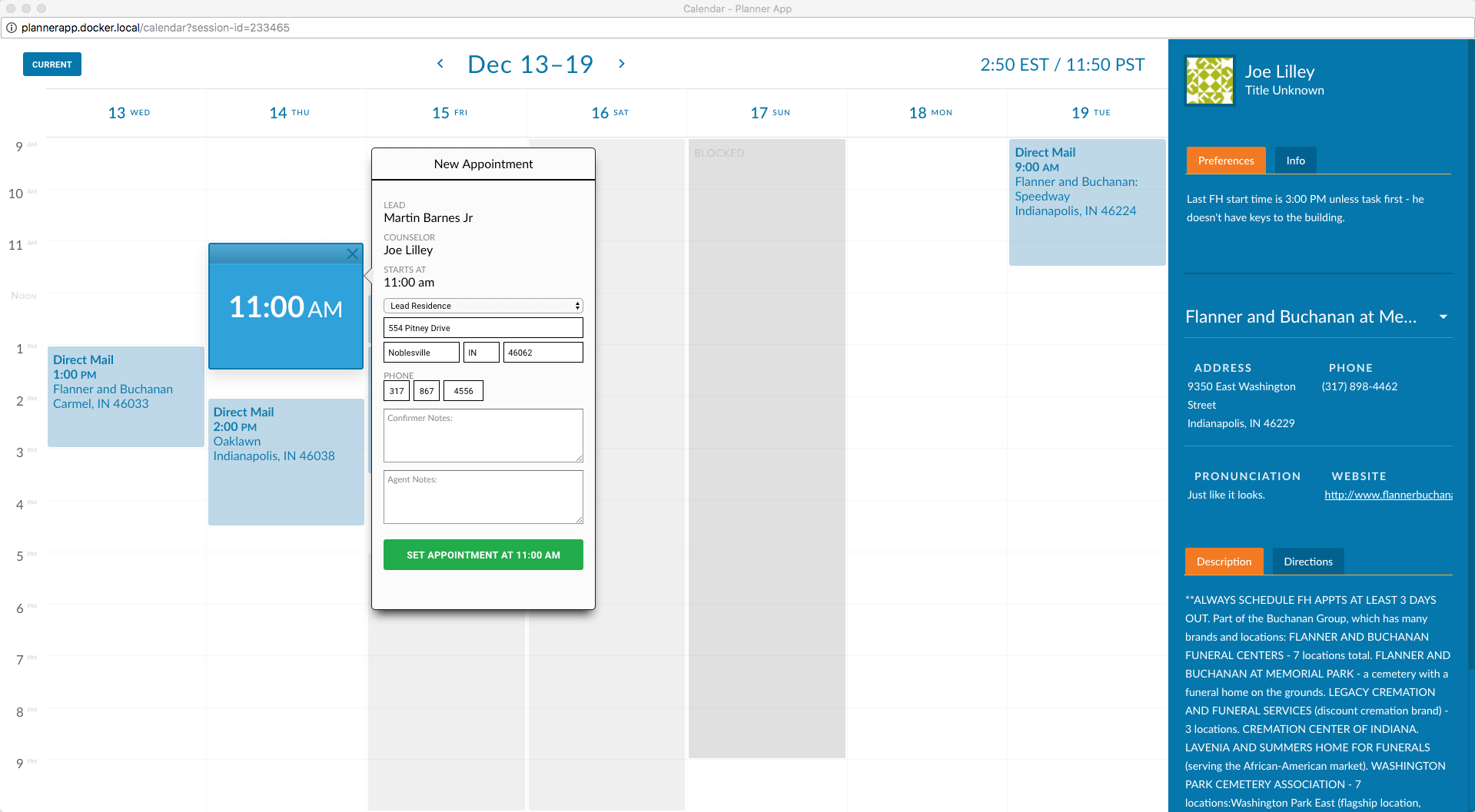 Where are we at today?

At the time of this writing (Jan 2018), it’s been a little over a year since this project started. While we’re still in the Release Candidate stage, we’ve deployed the application to over 80 planners in Portland, Oregon and Provo, Utah.

The feedback has been overwhelmingly positive and we’re just now beginning to see how easy it is for new planners to get set up and on-boarded with the application.